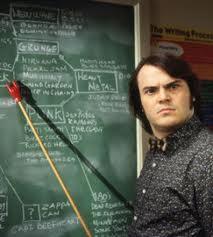 We all remember hitting that E minor power chord with that sweet saturated distortion coming off of our amps!!! That thunderous clap that ignited the fire within us to play electric guitar. However we soon follow our journey by watching concert vids or YouTube videos showing us just how amazing other guitarists are and just how far we have to go. In our quest to Guitar Hero status, we often take shortcuts and bypass certain techniques that, much to our disadvantage go on to plague us as we progress, the inevitable “bad habits” we’ve all read about in guitar magazines and forums alike… Here I’m gonna list five things the novice guitarist could focus on to better their six string journey

Pinky and the Brain

The Pinky or 5th digit, the weakling of the phalangeal brotherhood, is oft ignored by the budding virtuoso. The result being a dextrous and strong Index, Middle and Ring fingers with a pinky left floating uselessly in the air or tucked away. Use alone is what builds strength and muscle memory. One thing the Beginner can do is play Fret 1-4 Ascending and Descending using all finger AKA a chromatic finger exercise. This allows you to utilize each finger at equal intervals which helps with

finger strength along with timing and speed, which leads us to… 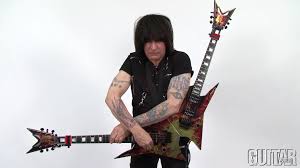 Speed is a very important fact and tool in music, not just how fast you can play but also how slow and if you can get a groove going. All of us soon see the Vai’s and Yngwie’s of the world ripping up the fretboard to pieces reducing their plectrum’s to a smoking filed down nubbin. The best thing one can do is add a metronome to their daily practice, starting at a slow or comfy tempo, slightly and gradually raising the bpm’s. First trying with simple down strokes and moving onto more economic picking techniques i.e…

Alternate picking adds a level of groove and dexterity than downpicking alone can not. Called as such because you alternate between upstrokes and down strokes of the picking hand. Again grabbing a metronome will help immensely when learning alternate picking. The same TAB pattern used for the Chromatic exercise can be used for alternate picking. If you plan on playing AC/DC’s Thunderstruck (of course playing with tremolo picking as opposed to the tapping version) throughout, this is an exercise you will need to add to your repertoire! 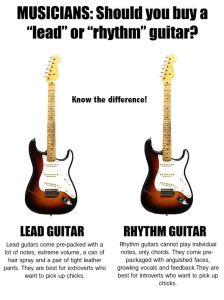 Lead guitar is what most (not all) aspire for. A lofty but attainable goal, but what shall you do between guitar solos? Stand on stage drinking? Signal to the sound man which groupies to bring back stage? Lead playing, though flashy and creative, only encompasses a small percentage of playing, by definition all lead guitarists are rhythm guitarists. While the Singer is stealing the show, you, along with the drums and bass, will need to keep the rhythmic bedrock of the music pumping along. Rhythm is the heartbeat of music, it is what makes you take notice and gets your foot a tapping!

If you can’t play in time then playing in front of people, or along to records at home is gonna be quite frustrating. Again here the metronome comes into play! Set a tempo and start banging out chords, or if that appears too monotonous, put on your favorite song and play along with it, feel the groove and sway of the music, as you become more comfortable you’ll begin to just “go with the flow”, it’ll become second nature, and when you find that groove pocket, you’ll know what heaven feels like to us mere mortals.

Last but certainly not least is THEORY. Sure we all know about the great Blues legends that didn’t know the difference between a Harmonic Minor scale and Major Scale. Hopefully you are blessed with that subconscious/ephemeral knowledge and attachment with music, but if you are like the rest of the music playing population knowing even the basics of the “Musical Language” that is theory can only help! How far you want to go with it is entirely up to you and what your preferences and tastes are. But help it will, simply learning the Minor Pentatonic Scale can open up your vocabulary and phrasing potential within the Rock and Blues genres! Knowing what notes make up certain chords can help when looking for different flavors and tonality for songwriting! Simply put, learning something new is always gonna be a positive force in life, so don’t give up the chance to broaden your musical horizons, with the advent of the Internet the world’s information is at our fingertips, don’t waste that time looking at cat videos…

This is by no means meant to be an exhaustive list for beginners, just a few points to think about when you are beginning you guitar journey! If all else fails Metronomes make very nice furniture and or paper weights…. 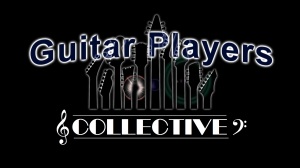